It's all about the Hole in the wall... 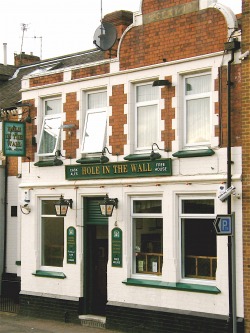 This attractive 19th century free house features a Dutch gable. Originally named the ‘Regent Inn’; a local railway signalman built houses along Regent Street and gave the premises to his daughter, late 1800’s. When she deceased the premises were sold to Stones Brewery who expanded it using an adjoining dwelling in the 1950’s.

The pub was renamed the ‘Hole in the Wall’ because the building features an original serving hatch that was once used to sell flagons of ale to the lace workers from the nearby Regent Mill’s.

Flagons of ale are still available today upon request.

Conveniently situated for public transport on a side street near to the centre of town and within walking distance of the Erewash canal.
To the rear of the premises there is a decked smoking terrace designated for smokers and non-smokers alike, including a beer garden, enclosed skittle alley and barbeque area.

This traditional free house offers two distinctive drinking areas: a lively bar with pool table, and a quieter lounge area complete with the serving hatch from all those years ago. Both of which, are adorned with breweriana. 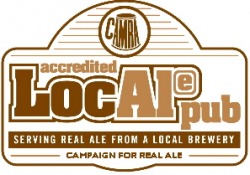